It was announced today by the Honourable Pablo Rodriguez, Minister of Canadian Heritage and Multiculturalism, that Simon Brault has been re-appointmented as the Director of the Canada Council for the Arts for another four-year term. I am excited to hear this news as an artist who relies on the support of government for the various projects I produce and as an arts administrator immersed in the Indigenous arts sector.

When I first met Simon Brault I thought we were not going to get along with each other. He talked fast and had a lot to say which often indicates that someone is more interested in being heard than listening to others. We had several discussions at National Arts Service Organization meetings and for the Indigenous arts sector in relation to the newly created Creating Knowing and Sharing department. There were also a series of Canadian Heritage development meetings that took place where we crossed paths. 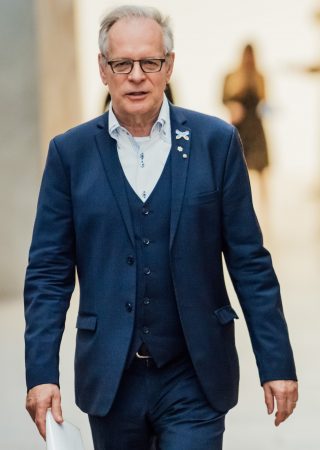 Early on, I had asked Simon some tough questions regarding disbursement of funding and priority groups. It’s the type of question that has no right or wrong answer but instead forces someone to align with or against someone. Debating policy and protocol is how I push for higher levels of equity between peoples. The first response Simon gave was typical, it made effort to acknowledge my position and state actions either available or in development. I wasn’t overly impressed but I left thinking well of him.

A few weeks later we were in a room together again for a different meeting. Someone had asked a similar question to the one I had asked a few weeks prior. Simon responded completely differently than before. He had prepared organizational actions to respond to the issues, consulted heavily with staff at the Canada Council and was prepared to make stronger commitments than at the previous meeting. It made my head spin around and look at him in shock.

Over the following years I met with Simon several more times in various work related capacities. He was always interested in hearing what I had to say and answering in a very straightforward way. If the Canada Council for the Arts could support something, he would make effort to tell me how. If they could not, he would explain why. I respect Simon Brault because he is prepared to say no to me and tell me why. There is nothing worse than not knowing where you stand especially when navigating government programs in Canada.

There are many things about Canada that I love and just as many that make my heart ache. A major benefit to living in Canada and being “Canadian” is existing in a world where critical discourse is celebrated, a place where differences can be discussed and relationships reconciled. In my utopian version of Canada, conflicts are resolved through discourse and debate and never escalate to conflict. I believe that Simon shares this vision for the arts in Canada and sees the arts as ways to increase civic engagement and prosperity on the ground by raising the quality of life for everyone, not just those currently accessing funds.

I have witnessed Simon travel all over the country to stand accountable to local communities for changes that affect them. The difficult task ahead within Canada is finding new pathways for healthy cohabitations between many peoples. Understanding the positions of all groups and exploring how mutually beneficial outcomes can be reached. I feel strongly that Simon has started the arts sector on a new pathway during his existing time as CEO and I am very happy to have him remain so we can see this path through to the end.