Opposition / Unity: The development of new works by Indigenous and non-Indigenous film and media artists. 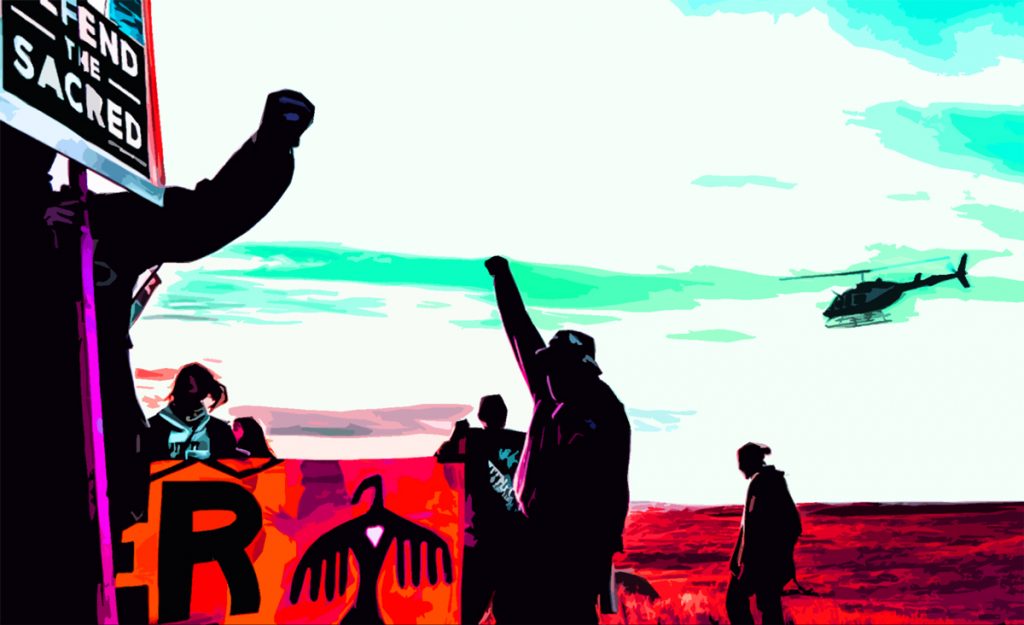 Clayton Windatt working as an Indigenous independent curator sets forth to create a project that embraces working together through Indigenous terms. “Opposition / Unity” is an exploration and evaluation of roles, identity and control exploring ways of cross-cultural experience both through independent film and large-scale multi-arts collaboration. The notion of opposition and unity represents a timely response to (re)conciliation and how Canada’s public has begun celebrating before any actual work has taken place to mend long broken relationships.

This showcase of short Indigenous films utilizes identity and cross-cultural politics to educate an audience on the state of current Indigenous relationships and rights. Using emotional states such as love, humor and anger, “Go “Pop-Culture” Yourself!” considers a variety of Indigenous perspectives all pushing towards higher understanding of self in relation to the land we all occupy.

Spirit of Birth
Rebeka Tabobondung • 11:49m • 2015 • Canada • English
After a colonial legacy of silencing Indigenous women’s wisdom, a searching mother and midwives journey to unearth traditional birth practice. They call back their ancient birthright as life-givers, and breathe pride, identity, and tradition back to a struggling community.

Ronnie BoDean
Steven Paul Judd (Kiowa-Choctaw) • 12m • 2015 • USA • English
A larger-than-life outlaw who must shake off an epic hangover and use his street knowledge to take on his greatest challenge yet, babysitting his neighbour’s precocious kids.

Braids
Cole Forrest • 2:26m • 2016 • Canada • English
An Aboriginal man beaten to death from the hands of racist folk from a nearby town, the next day, his partner comes by to pick up the pieces.

Mikwendan
Lindsay Sarazin • 4:30m • 2016 • Canada • English
A girl struggling with a life of studying learns a valuable lesson
about her roots when she falls asleep.
Canada, English

She Spins
Daniel Couchie • 3m • 2016 • Canada • English
She Spins tells the story of a troubled girl who is passionate and full of life but hiding a dark side, featuring music by Binaeshee-Quae Couchie-Nabigon.

sweet night
Jessie Short • 5m • 2016 • Canada • English
Andy is a young Métis woman living in a big city. When a friend invites Andy to accompany her to a large city park where she introduces Andy to sweet grass, it sparks a night of surprising exploration and self-discovery, ultimately reconnecting Andy with her Indigenous roots.

The End of the World
Clayton Windatt • 6m • 2015 • Canada • English
Depicting a world where invasion is taking place destroying a way of life. One way of life being forced to end without identifying either the invaders or locals explores notions of Fear, Assimilation, Environment and Chaos.

Land Of the Silver Birch… Home of the Beaver
Sara DeCarlo • 3:45m • 2008 • Canada • English
A parody of the Keep America Beautiful campaign, this unique video pokes fun at the stereotype of the North American Indian within Canadian culture. Accompanying folk song based on a poem by Pauline Johnson and performed by Sarah DeCarlo. Directed, Shot & Edited by Sarah DeCarlo.Starring James Whetung.

The Dancing Cop
Kelvin Redvers (Deninu K’ue) • 7m • 2013 • Canada • English
Two worlds collide in an unnerving musical number exploring the dark side of justice and the power of authority.

“Opposition / Unity” (Cross-Cultural Media Arts Installation)
Working with various regional artists, Windatt is initiating this projection-based installation facilitating the creation of several new abstract works collaboratively created by both Indigenous and non-Indigenous filmmakers. This night-based outdoor installation will be bright creating an immersive environment addressing the theme of water and our future. Short-Abstractions / films currently being explored deal with all types of emotional states and range in format from experimental to narrative driven. Current planned themes include but are not limited to: division, resources, generational differences, land, water, healing and life from both sides of cultural situations. All programming responds to the ideas of “Opposition / Unity” through representation and the act of creation itself. This is an Indigenous cross-cultural collaborative process allowing for learning and reflection while expressing individual artistic thought.