“My Stance” was my media arts project dealing with critical contemporary concepts within a community arts setting. The term “My Stance” connects with the current status of aboriginal people within the future that Duncan Campbell Scott, Deputy Minister of Indian Affairs from 1913 – 1932, proposed to create:

I want to get rid of the Indian problem … That has been the objective of Indian education and advancement since the earliest times … Our objective is to continue until there is not a single Indian in Canada that has not been absorbed into the body politic …
– (Duncan Campbell Scott, Deputy Minister of Indian Affairs, 1920)

During Aanmitaagzi’s “Dances of Resistance” large-scale community arts event, and my own “Integrated Opposition” curatorial project, each artist, or group of artists, was responsible for the creation of a site-specific installations or performance-based artwork that responds to the themes or resistance. The structures and performances were completely separate projects as performances were part of the “Development of Consciousness” project and the structures were part of “Integrated Opposition”. This resulted in a varied amount of interactions between performers and visual and media artists. All works contributed towards the larger narrative of the “Dances of Resistance” project, which in turn formed a an opinion on the ways that Aboriginal peoples have resisted assimilation despite repeated assaults upon their traditions and culture.

“My Stance” manifested itself twice, once in Hamilton Ontario at Factory Media Arts Centre during the Creative Cities Summit and the Hamilton Arts Crawl and a second time under a highway overpass near Nipissing First Nations as yet another project taking place in partnership with “Dances of Resistance”. During the summer when all these projects took place I conducted the “My Stance” project which was my own attempt to engage as an artist on the sidelines of larger projects I was either managing or working within. “My Stance” became “Makadewaa Namewag” as the media arts themes of Resistance that I explored related directly to the Serpent Tail that was being explored by Aanmitaagzi that year.

Makadewaa Namewag: There are many regional stories about the Manitou Islands that sit in the middle of Lake Nipissing. Several of these tales speak of huge animals and people being changed into creatures. “Makadewaa Namewag” means Black Sturgeon in Ojibwe and refers to the fish that is caught in the Serpent Tale. The story tells of the time when the Nipissing people travelled to the largest of the Manitou Islands to avoid raiding parties even though spirits were known to live there. As winter progressed the people began to starve, until one day a child gathering water from the small lake in the middle of the island noticed a great black sturgeon swimming under the ice. The fish was caught and the people cooked and ate it right away because they were so hungry. Later that day, a young girl who had been fasting away from the others ventured out of her lodge to find out why no one had come to visit her. Seeing no one around, she went to her father’s house only to find that her family had turned into giant serpents. The girl fled the island travelling alone across the lake to the mouth of the Sturgeon River nearly 20 km away where some of her people were camped. Upon their return to the island, they found nothing but empty teepees and slithering trails leading back to the hole where the sturgeon had been caught. No one has tried to live on the islands since. 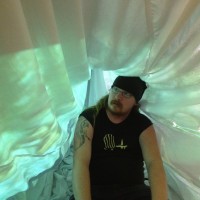 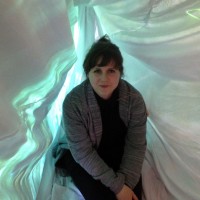 I had recorded a captive sturgeon at the Ripley’s Aquarium in Toronto and created several laser animations that together created my media arts installations. Working in Factory Media Arts Centre’s newly renovated rental facility was great as well as having hundreds of people going through the space during the Crawl. The Creative Cities Summit also conducted a tour for all the participants and included me in that process.

The work under the bridge was an exceptional experience. I had to keep everything separate again and did not notify any artists that I was secretly building my own installation at a nearby site. I walked the entire audience through this “surprise” installation which was returning to the original site where the “Dances of Resistance” project had first began with Penny Couchie dancing in that site in 2010. There was a large media installation running off of a portable generator as well as a performance piece that uses fireworks… 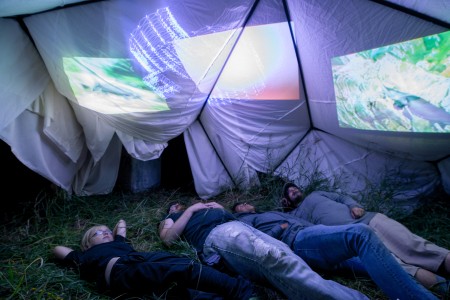 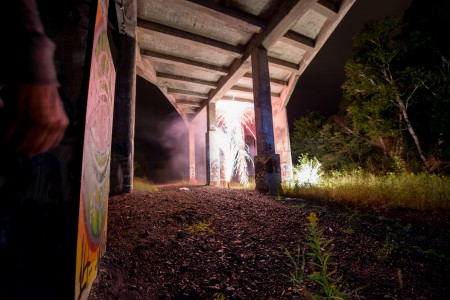 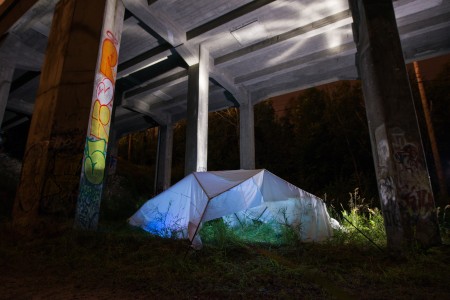