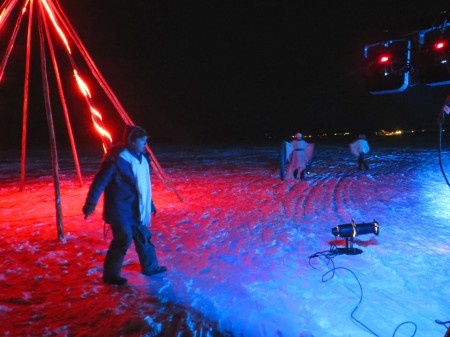 “Integrated Opposition” is a curatorial project developed by Clayton Windatt dealing with critical contemporary concepts within a community arts setting. The term “Integrated Opposition” connects with the current status of aboriginal people within the future that Duncan Campbell Scott, Deputy Minister of Indian Affairs from 1913 – 1932, proposed to create:

I want to get rid of the Indian problem … That has been the objective of Indian education and advancement since the earliest times … Our objective is to continue until there is not a single Indian in Canada that has not been absorbed into the body politic … (Duncan Campbell Scott, Deputy Minister of Indian Affairs, 1920)

No one was absorbed, but aboriginal people have become a part of the world Scott spoke of in many ways and mostly on our own terms. Over the past hundred years steps were slowly taken to make reserves more like townships and “res” life has become, in many ways, very similar to that of any impoverished small town in Canada outside of cultural considerations. Nipissing First Nation in Northern Ontario, for example, has the same infrastructure as many poor communities in Ontario with a population of less than 5000. The relationship between the Canadian Government and the Aboriginal people of Canada has become a relationship of opposition. “Progress” for any agenda either from Government or Aboriginal community is slow and cautious with many stumblings along the way. Has native life become integrated into Canadian society in the way that Scott predicted, or are we autonomous but living along side of westernized realities? Questions such as this can help to explore current aboriginal identity and contributes to discussions taking place within the arts circles of Canada and abroad.

“Integrated Opposition” will take form as innovative arts installations within a series of re-imagined traditional structures made from either contemporary or traditional materials. By making approximately 6 tipis, sweat lodges and wigwams that embrace both customary and modernized building theory we examine the context of aboriginal identity through a contemporary lens. These structures house spaces for artists to create and present within as each discovers their own connections between past and present realities. Themes such as resistance, the formation and expression of identity, and cultural survival, as well as stories and reactions to the residential school system, racial discrimination, language and cultural barriers, and other traumatic or prohibitive experiences will be explored, creating an interesting and informative juxtaposition of ideas and materials forming a collective statement of opposition.

Each artist is responsible for the creation of a site-specific installation or performance-based artwork within their own constructed structure that responds to the themes outlined in this project. These pieces will contribute towards the larger narrative, which in turn will form a distinct component of Aanmitaagzi’s large-scale community arts project, “Dances of Resistance” which is also working in partnership with the Active Arts Festival. Aanmitaagzi is an Aboriginal community arts group based on Nipissing First Nation, and their multi-year project, “Dances of Resistance”, explores many of the ways that Aboriginal peoples have resisted assimilation despite repeated assaults upon their traditions and culture.

“Integrated Opposition” is an independent project operating within Aanmitaagzi’s large scale event. Although the artists working with Clayton Windatt are all responding to the themes set forth by this event, they remain free to explore their own practice in whatever way they see fit. Aanmitaagzi has requested that Clayton Windatt attempt to secure funding to enable his project to go beyond their resources and become a highly acknowledged and recognized event on its own. This will add emphasis to the larger art project and enable his project to achieve a high level or artistic quality and an effective level of dissemination.