I wanted to take a moment to reflect a bit on relationship building in the arts and how the term “Cultural Diplomacy” has begun to occupy a greater amount of space in my life.

Relationship building is complicated, and has intricate details that impact each individual involved in unique ways. There is never a one-size fits all situation for how a relationship can form as each person interacts on their own terms resulting in alignment, difference of opinion, and at times conflict. Diplomacy is in itself an art form as it inspires how we interact with each other in a sensitive and effective manner.

Cultural diplomacy, not surprisingly, brings the consideration of cultural identity and background into the diplomatic process. Employing cultural diplomacy while engaging in formalized actions brings your personal background into the developing relationship, meaning you are now representing larger mandated actions of diplomacy on behalf of a group that has tasked you to represent them.

Recently the Canada Council for the Arts released a minimal update on the various cultural diplomacy actions that they have been conducting entitled “Renewing Canada’s cultural diplomacy”, outlining some of the locations, events and organizations they have been building relationships with. The reason why I say “minimal” is that this report outlines the tangible actions seen by the public which does not convey the significant amount of effort that goes into developing and maintaining these relationships or other efforts that have not resulted in public actions… yet.

The volume of effort that goes into seeking out like-minded individuals, recognizing value in collaboration, understanding needs for roles in relationships, collaborating and negotiating ongoingly while respecting each other to ensure an atmosphere of reciprocity is reached and where all involved feel that partnerships are conducted on mutually beneficial terms is a lot of work.

This is especially true when considering the shifts in local and global political and arts climates over the past 20 years. Cultural diplomacy and the inclusion of arts, culture and heritage in “Global Affairs Canada”, (the Department of Foreign Affairs, Trade and Development) has been a recent addition after previous governments deprioritized cultural trade for Canada. The Canada Council for the Arts has been filling the void in whatever ways they can during this time by engaging in international project grants as well as forming collaborative actions between institutions and governments. 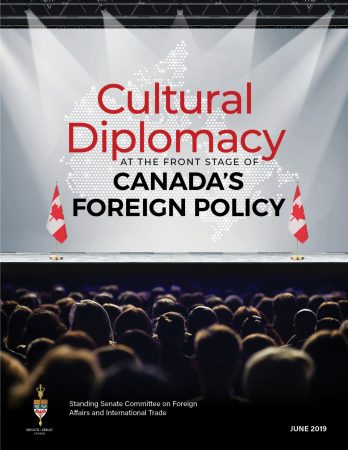 In a report earlier this year by the Standing Senate Committee on Foreign Affairs and International Trade entitled “Cultural Diplomacy at the Front Stage of Canada’s Foreign Policy” statements about the role of cultural diplomacy and its importance were made. It explains “the Canadian government’s interest in cultural diplomacy has been inconsistent over the years: initiatives have been undertaken to only then be phased out. Regardless, Canadian artists, writers and cultural organizations have themselves never stopped projecting the country’s culture and arts internationally”. This statement obviously acknowledges their past and values cultural actions in their future, but this acknowledgement is also crucial as it validates the existing efforts by the Canada Council and other such organizations.

Within the senate report several major recommendations were made setting out priorities and actions for the next few years. Within recommendation #4, the senate designated “Global Affairs Canada as the lead department responsible for coordinating and delivering Canada’s cultural diplomacy strategy. The roles and responsibilities of other federal departments and agencies involved in the promotion of Canadian arts and culture should be clearly established in the strategic policy framework”. Foreign Affairs will have to effectively relearn cultural diplomacy as current staff may have relevant skills from the past, but have not actively employed them for over a decade. This does not mean that they are ill-equipped to tackle culture as part of their job, but it may mean that they need outside support to be successful in arts, culture and heritage actions.

Another recommendation in the senate report is to “ensure that the Government of Canada will invest in cultural diplomacy as an enduring pillar of Canada’s foreign policy” which I interpret as a declaration that the inclusion of cultural diplomacy in foreign trade will cost money and should not be expected to be done for free or tagged-on to existing staff roles or initiatives. All of this is valuable for Canada on a fundamental level, but there is room for expanding this conversation further especially when considering cultural diplomacy towards our own populations.

A key aspect of cultural diplomacy is acknowledging the effort needed in building relationships and understanding the value of these relationships. The Canada Council has been negotiating relationships since their inception in 1957. They have been monitoring how the arts are valued by the public, what needs the arts community has, and what role the arts play in the everyday lives of Canadians.

In recent years, they have engaged in a certain level of cultural diplomacy with the Indigenous arts community through the development and formation of the Creating, Knowing and Sharing: The Arts and Cultures of First Nations, Inuit and Métis Peoples department. This new Indigenous-led department within the Canada Council was established through generations of Indigenous artists and Canada Council staff pushing for higher levels of Indigenous sovereignty and “relative” independence within the arts sector.

On a personal level, I feel like I have been employing conscious cultural diplomacy more and more, especially when discussing Indigenous arts between artists and curators. The arts environment is constantly changing which means that nothing should be expected and assumptions need to be challenged in order for mutual understandings to be reached.

I have high hopes that Global Affairs Canada will consider the work the Canada Council for the Arts has been doing in cultural diplomacy as I see momentum building towards beautiful things in our collective futures. I also hope that many other branches of the Canadian government take a look at the structure of the Creating, Knowing and Sharing department and consider how their own departments could employ higher levels of cultural diplomacy with Indigenous peoples.