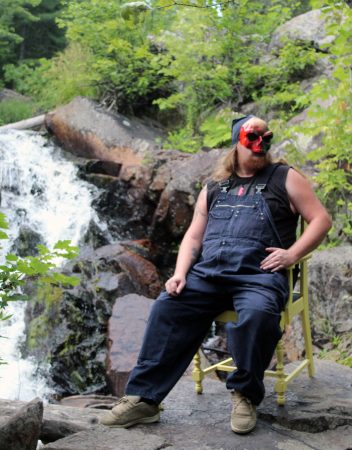 BACKGROUND: My research and policy development exploration project “CHANGE MAKERS / MAKERS for CHANGE” was a lot of fun allowing me to engage peers that I would not have had the ability to engage at this level. My attempt was to take an evaluative look at Indigenous and Non-Indigenous craft environments exploring intersection points between communities and practices. I did this by engaging multiple craft peers through online communications and face-to-face meetings including major development meetings in Saskatoon, Regina, Halifax, Toronto, Montreal and my home region of Nipissing. In the spirit of activism and making statements that inform, educate and influence; CHANGE MAKERS / MAKERS for CHANGE researched craft as a vehicle for making messages. I feel that Craft is the most accessible art form within any community as it is often produced in multiples and serves a function within everyday life. Considering all craft forms, be it textile, jewelry, paper, ceramic and many multiples; craft as the arts genre able to reach many peoples and bring many peoples together.

This 6-months preliminary research from summer to winter 2018 empowered me to interview craft artists and craft organization representatives beginning the formation of a major shift in my life-path. This work revealed to me how much I care about the craft sector, the people involved and the work itself as it holds special meaning for me. I postponed the creation of resource materials until further exploration and research can be conducted as the subject is too large to handle in such a brief period of time. For the past 10+ years I have worked facilitating spaces that push for higher levels of understanding between communities through writing, curatorial practice, activism and many forms of craft. This project has allowed me to expand my practice furthering these goals. This time has been spent engaging and exploring many issues and themes impacting and revolving around the Canadian arts ecoloigy specifically craft but also the intersection points between peoples and communities. 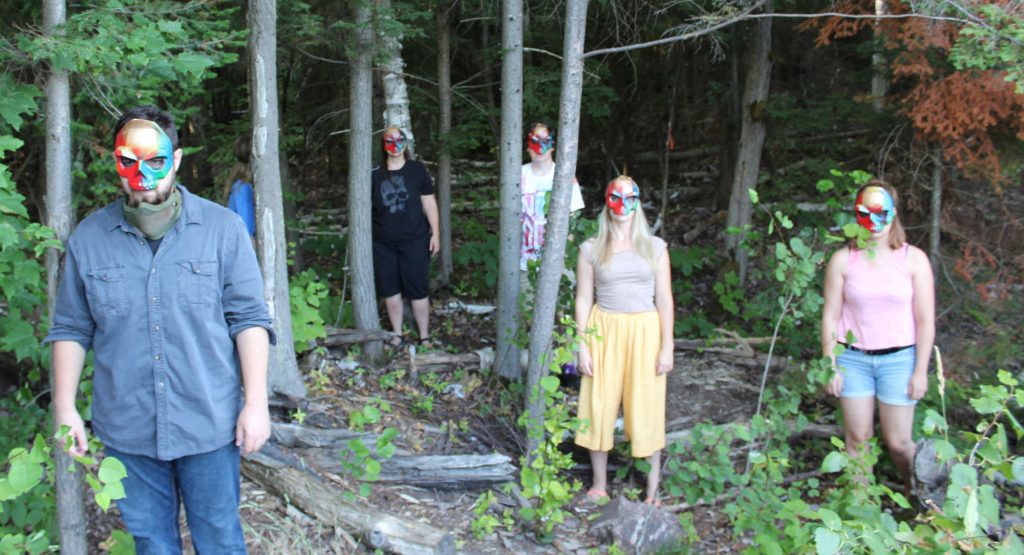 PRELIMINARY DISCUSSIONS: Many research took form as basic social interactions, meetings and discussions which were often more about reaching conclusions and consensus than producing efficient documentation. As a preliminary research initiative it is more about establishing pathways than exploring them fully. For each interaction, we would discuss how work can be done between groups, peoples, regions and institutions. Over the time this project took place I talked a lot about craft ecologies. How can bigger plans be made collaboratively? How can movement take shape between groups, distances and even sectors?

I cannot understate how valuable both Leopold Kowolik of Studio Magazine and Maegen Black of the Canadian Crafts Federation is for exploring, responding and understanding the dynamics within craft, makers and the various communities across Canada that engage through craft. Our discussion have escalated over the years from challenging each other to the formation of strong ideas about the transformative power that craft has through community and community has through craft. All of us care very much about the communities we attempt to represent and make active efforts to support the development of new ideas that bring makers within Canada forward into higher levels of dissemination and collaboration between craft artists, communities and populations. I am very lucky to have worked with both of them. 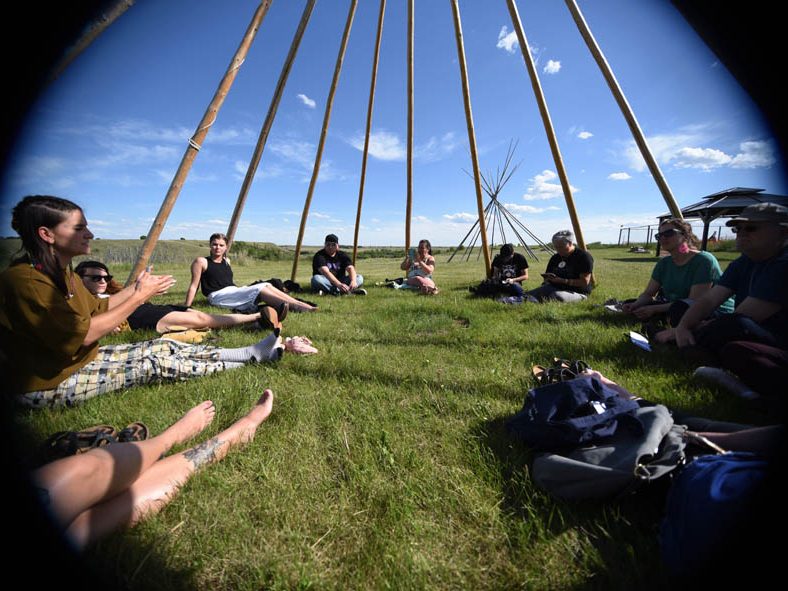 While travelling with Jacob Dayfox to Saskatoon in summer 2018 to be part of the “Listen, Witness, Transmit” produced by  The National Indigenous Media Arts Coalition (NIMAC) in partnership with the Independent Media Arts Alliance (IMAA) I was able to engage in some craft development conversations. I was able to meet and talk with Niki Little of NIMAC, Adam Martin of Sâkêwêwak, Jessie Short of TRUCK Contemporary Art and Franchesca Hebert-Spence of the Art Gallery of Alberta. These discussions opened to a lot of other areas consistently making connections between craft and the overall arts ecology. It became obvious to me that only those that work exclusively in the fine craft market view the craft sector as being independent of the fine art sector. This combined with the blurring of lines between genres in the current contemporary arts environments found across the country and we see how craft is viewed as a connector that transcends genre more than being defined as a sub category within fine art.

A face to face meeting in Toronto took place with the recently emerged federal thinktank group “Mass Culture” where I had the honour of engaging more than 100 people in discussions. I also met with representatives Kristian Clarke of the Dancer Transition Resource Centre, Kate Cornell of the Canadian Dance Assembly and Canadian Arts Coalition, Tara Mazurk of Cultural Industries with Global Public Affairs and Robin Sokoloski of the Playwrights Guild of Canada to discuss National and Global arts climates with me during a day-long retreat. It was an honour to talk with them all and full-disclosure; I am on the board of Mass Culture too. The discussions that I have with the Mass Culture team informs my ongoing research and practice greatly. 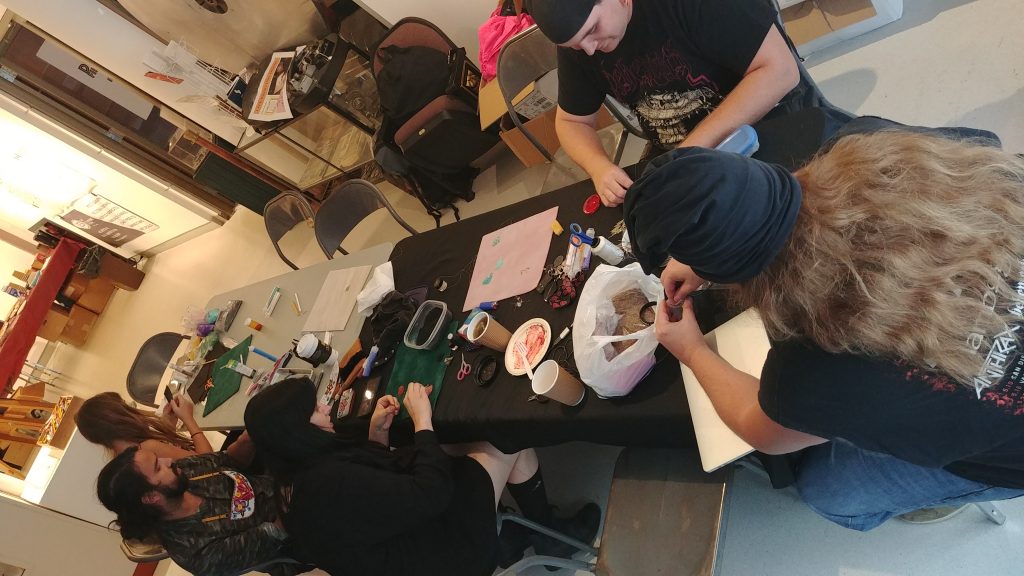 I had the honour of asking artists Dayna Danger, Jacob Richard Dayfox and Nico Williams to engage in a “BEAD N BITCH” session as part of the ON THE EGDE Fringe Festival and the Zakide summer incubator “Duality-Firestarter” in North Bay, Ontario. We bought literally pounds of beads to share with people for free and create artworks together on-site during a whole day of talking and sharing. There were edible varieties of pies to eat during this kitchen-table style beadwork activation. The discussions remained relatively casual allowing people to utilize beading as a venue for socialization. Although a group of professional artists were involved which also made the discussion revolved around professional aspects of the art world. Collective creation processes such as this allow for opinions to be shared and consensus to be explored.

As part of discussions taking place with my job at the Aboriginal Curatorial Collective, a major international gathering took place in Halifax, Nova Scotia. This was the 2018 edition of the ACC-CCA’s ongoing colloquia and gathering series, Pjilita’q Mi’kmaki: L’nuite’tmukl tan wejkuwaql naqwe’kl International Gathering of Indigenous (First Nations, Inuit, Métis and other relatives) curators, arts workers, writers and artists of all disciplines from October, 2018.

The Canadian Craft Federation’s 2018 Annual National Conference entitled “Placemaking: The Unique Connection Between Craft, Community + Tourism” took place in October overlapping with the ACC-CCA event and empowering me to engage the Craft Federation gathering outside of my job. They held three distinctive sessions, in Nova Scotia for the gathering of craft sector leaders from around the country, in Halifax and another in Lunenburg which included tours, panels, lectures, and networking.

Another major component of this trip was a festival taking place in Halifax at that time was NOCTURNE: Art at Night which was exciting for me. I was able to tour through Halifax’s downtown region and engage many craft venues viewing and buying a pile of works. I had the privilege of touring several spaces in discussion with Camille Georgeson-Usher of the ACC-CCA, Sandra Dupret of Fleming College and Gilles Latour of GR Latour Consulting. Sandra and Gilles are both involved with the Canadian Craft Federation on their board allowing me to have a lot of feedback about current relationships, constraints and areas of potential collaboration and growth.

While in Nova Scotia, I was able to meet with many artists and have many discussions but one discussion stands out. I was able to see Adam Martin again and this time I pressed him to give a quote for the craft sector about how best the craft community can engage Indigenous peoples and find ways of working together. As Adam reflected on this for a moment, I was worried that he would give me a response that I could not effective communicate back. The complexities of relationships are not easily summarized and addressing pan-Indigenous issues as base-relationships between peoples is also something almost impossible. I found his response to be something that can be taken to heart. He stated “Sponsor a F-cking table for an Indigenous craft artist at a F-cking Pow-wow”. I hope his bluntness drives home the message. He then explained that more time is spent by major institutions reflecting on the divisions of people than effort spent forming stronger relationships. Adam also stated that Pow wows are very public events and that everyone should now how to reach other to them. “It’s not miracle work, sponsor a table at a pow wow and watch Indigenous craft people start paying attention to what you are doing”. 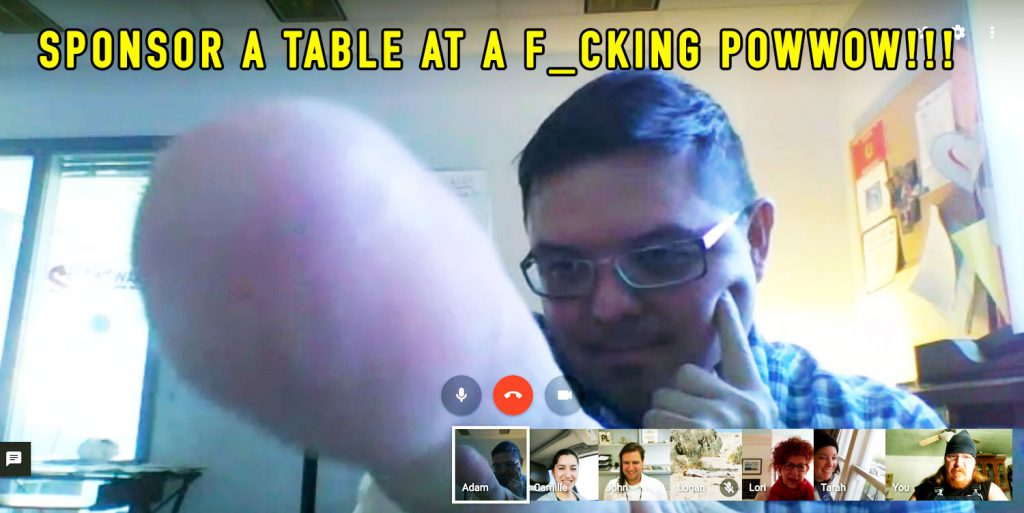 RESULTS: The various interview-style discussions and kitchen table talks helped build insight for my overall view of the craft sector and helped build reflections that individual makers and organizations can utilize and share. This project contributed to my personal development heavily giving me time to engage many interviewees and throughout 2018. This project furthered my work helping me to activate my own craft curatorial practice through communication and strategy leading to representation and dissemination as the next step – producing.

As a completely unrelated benefit, the “Citizens of Craft” podcast interviewed me in relation to the development of new spaces, ideas and intersections between peoples. I wanted to share the great work being done by the CCF and also state that this podcast was the beginning or my relationship with Stephen Hurley who now I work with on various podcasts and research projects.
https://canadiancraftsfederation.ca/citizens-of-craft-the-podcast-in-review/

Another production that took place as a secondary benefit to asking so many questions was the interview that the Inuit Art Foundation requested I conduct for their magazine in which I had a conversation with Kablusiak and Jesse Tungilik in relation to community engagement and craft formations. The discussion was really informative and helped me to get to know each artist at a higher level. They are both exceptional people and doing very challenging contemporary art working with community in formation of both form and idea.
http://iaq.inuitartfoundation.org/product/31-4-winter-2018/

Entering 2019, I have made plans to leave my day-job and work towards a large-scale research initiative entitled COHABITATION CANADA which is a continuation of CHANGE MAKERS / MAKERS for CHANGE working with voicED radio and Stephen Hurley to expand the project after working closely with him and the Canadian Conference for the Arts this past year. I will also be publishing a list of industry recommendations in spring 2019 that are a direct result of this work hopefully making offerings to people that will help build healthier relationships in the future. :)

I would like the thank the Canada Council for the Arts and the the Jean A. Chalmers Fund for the Crafts which supported me as a craft professional contributing to an understanding of the fine crafts in Canada. The support of  this research has assisted me greatly in forming policy development recommendations that will impact actions in my future and towards those organizations I engage. I would also like to honour the late Mrs. Chalmers, who left $500,000 as an endowment to the Canada Council for the Arts following the death of her husband in 1985 making the Jean A. Chalmers Fund a reality allowing for critical explorations and celebrations of craft to become ongoing. Thank you all.